PHILIPSBURG:---Shortly after 2 pm on Sunday, a shooting took place in the vicinity of Garden Market in Simpson Bay where one person was shot dead.
Police Spokesman Inspector Josepha reported the shooting but did not provide any details on what appeared to be an armed robbery.
The suspects involved in the broad daylight shooting while the island is on lockdown escaped in an unknown vehicle towards the MAHO area where police were also searching to locate the suspects.
Up to the time, this article was written the body of the victim remains on Simpson Bay road with police on the scene investigating. The killing on Sunday is the 4th murder for the year 2020.

SMN News understands that the victim is a waiter at Roxy Beach Bar and former employee of Sale & Pepper also located Simpson Bay.
The victim who was identified by friends of both establishments has been identified as Josep Jihad Soboh.

An investigation into shooting on the Welfare Road.

The Police Patrol and Ambulance department were sent to the Welfare road on the crossing with Billy-folly on Sunday afternoon March 22th 2020 at approximately 02.00 pm, where a male victim was injured after being shot.
In front of a well-known supermarket on Welfare Road, the police patrol and the personnel of the Ambulance department encountered a male victim who was suffering from a gunshot wound in his upper body.
Shortly after the paramedics appeared on the scene and started administrating Cardio-pulmonary resuscitation (CPR) but could not revive the victim. 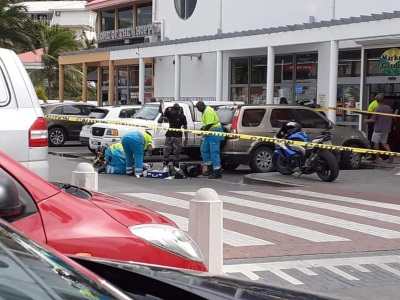 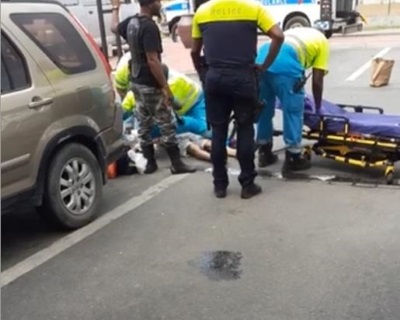 According to the information gathered at the scene, the victim was sitting on his scooter in front of the supermarket. He was approached by an unknown man who was brandishing a firearm and requested him to hand over his scooter.
The suspect who was dressed in shorts with slipper on his feet and had a bandana over his face tried to rob the victim of his scooter on the parking lot of the supermarket.
During this robbery, the victim suffered a gunshot wound to his upper body. After injuring the victim the robber fled with the scooter in the direction of Simpson Bay.
The doctor who appeared sometime later stated that the victim had died from the gunshot wound he received.