Police Clear ‘You Stink’ Protesters From Minister’s Offices in Beirut

BEIRUT, Lebanon — Demonstrators from the “You Stink” movement, protesting a garbage pileup and political dysfunction, occupied the offices of Lebanon’s environment minister in downtown Beirut on Tuesday, declaring that they would stay until he resigned.

But on Tuesday evening, after an hourslong standoff, riot police officers cleared them from the offices, grabbing, beating and shoving demonstrators, according to protesters.

“This is a peaceful evacuation by the Lebanese authorities,” Wadih Al-Asmar said sarcastically, showing a large bruise on his arm.

Until the move by the police, the occupation by the demonstrators had been peaceful. Interior Ministry police officers stood outside the building and the environment minister, Mohammad Al Mashnouq, said he would remain in his office. Videos posted online by the protesters showed at least a dozen of them sitting along the sides of a hallway, grinning, singing, cheering and chanting: “Leave! Leave! Leave!” 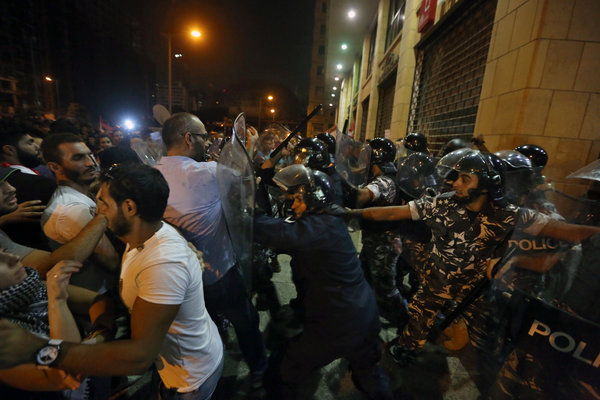 Supporters of activists inside the Environment Ministry clashed with riot police officers in central Beirut on Tuesday. CreditBilal Hussein/Associated Press

The sit-in signaled a new phase of the You Stink movement, which drew its largest crowd yet to central Beirut on Saturday as thousands demonstrated peacefully in a rare show of unity from a public often divided along political and religious lines.

Organizers had given officials three days — a deadline that expired Tuesday evening — to meet their demands or face what they called escalation. The government, not accustomed to this mode of protest, appeared not to have prepared a graceful way to react.

Inside the minister’s offices, the air-conditioning was shut off and the bathrooms were locked. The police gave the protesters a half-hour to get out. Outside, army vehicles arrived and riot police officers gathered.

While it is not unusual for the army, considered the least partisan of Lebanon’s security forces, to take part in keeping civic order, protesters said it seemed like an overreaction.

Lebanese news channels broadcast for a time from inside the ministry headquarters, as the demonstrators sought to provide a kind of national tutorial on nonviolent protest tactics.

“They don’t understand that we are doing civil disobedience,” one organizer told a reporter when asked what would happen if police officers entered. “We will not leave. And of course we will not confront them.”

The demonstrations began in July over the mountains of garbage that piled up after political disputes disrupted trash pickup, and expanded to include the general gridlock and corruption that paralyze government services and the economy.

Questions about whether and how the movement can sustain and broaden itself remain. It is unclear if it can win concessions from a political class that has counted on inertia and division to deflect challenges to its rule.

“We want to have some small successes so we can fight more,” said Lucien Bourjeily, a member of the small group that coined the name You Stink, a jab at political leaders on all sides.

“The challenge is to be able to be responsible for this historical moment that happened on Saturday,” he said in an interview hours before the sit-in began.

The focus on Mr. Mashnouq reflected this pragmatic approach: He is the person most visibly responsible for the sanitation crisis, since his ministry handles trash disposal. And he is closely identified with the centrist prime minister, Tammam Salam, making him a symbol of the government in general and allowing protesters to deflect concerns that they are serving either side in Lebanon’s main political divide between Hezbollah, the militant Shiite group, and its primary rival, the Future Movement.

Since the demands were issued, Mr. Mashnouq has resigned from a committee created to manage the garbage problem — but not from the cabinet.

“Can you imagine, the minister of environment stepped down from the committee that deals with the garbage, but he is still a minister,” said Mr. Bourjeily, a theater director. “Who should deal with it then?”

Mr. Bourjeily was one of those who occupied the office and was later taken to a hospital with an injured arm, protesters said.

You Stink is a loose-knit group that includes longtime good-government activists and political neophytes. The organizers say they are making decisions along with a committee of citizens from different sectors of society.

Existing labor, environmental and other organizations have been broadly supportive of the movement. But so far, there have been few concrete results; while garbage has been picked up in fits and starts, it has been dumped illegally, and there is no long-term disposal plan.

Other You Stink demands include accountability for attacks by security forces on protesters at earlier demonstrations, money for municipalities to handle their garbage collection, and parliamentary elections, which have been postponed twice.

As supporters gathered outside the office building, which houses the ministry along with private businesses, riot police officers lined up nearby.

The action took place in the heart of downtown Beirut, just opposite Roman ruins, the central clock tower and the pedestrian area of Nejmeh Square, and two of the city’s grandest houses of worship, a mosque and a church that stand side by side.

The protesters insisted that they did not want to talk to anyone but the minister himself and would not leave until he stepped down. But the prime minister was quoted in the local news media as saying that he had “ruled out” the resignation.

Mr. Asmar said the protesters told Mr. Mashnouq’s staff that “he failed in his job,” and chanted it loudly so that the minister could hear. “This kind of action, Lebanese people should do more often,” Mr. Asmar added. “This is what we are asking for, accountability.”

After several hours, security forces ordered journalists to leave and even cut the transmission cable of one television station. Soon after, the police moved in. News of the clash brought several hundred people to the area, where they kept up a tense standoff for hours with several hundred police officers and soldiers.

“In other countries people have asked to take down their state,” Mr. Asmar said. “We are asking for a state, and they are beating us.”