One Year on, How Lebanon’s ‘revolution’ turned to disaster

Beirut - Beirut seemed calm, quiet and normal a year ago today when President Michael D Higgins, on an official visit to Lebanon, lunched with his counterpart and took tea with the parliamentary speaker.

In the evening, as we tailed his motorcade to our hotel from the Serail, the handsome Ottoman barracks where premier Saad Hariri hosted a banquet, 150 protesters took to the streets nearby.

They demanded electricity, water, jobs, reforms and an end to the sectarian system of governance imposed by colonial ruler France before independence in 1943. Lebanon has not seen a normal day since.

The trigger for the protest was a tax on WhatsApp calls, one in a series of demands imposed on the public to fill depleted state coffers with hard currency – and thus enable purveyors of food, medicine and fuel to supply essentials for a country which imports 80 per cent of its needs.

The uprising was dubbed a “revolution” by hundreds of thousands of Lebanese of all backgrounds and faiths who filled the capital’s central squares, turned out in towns and cities across the country, and erected barricades on highways.

Happy revolutionaries brought children to the demonstrations, brandished flags and posters and handed out bottles of water and sweets.

Lebanese were as optimistic as the cheerful Egyptians who massed in Cairo’s Tahrir Square during the 2011 rising.

Lebanese activists made plans for the day when their country would shed corrupt sectarian warlords and feudal bosses who had misruled for decades through patronage and clientelism.

But thugs from the status quo Shia Amal and Hezbollah movements attacked the revolutionaries. Troops and security agents also tried to crush the protests but failed.

At the end of October Hariri resigned, but he remained as caretaker until a “reformist” government of “experts” under Hassan Diab was installed in January.

The ministers were not the independents that the revolutionaries demanded, but factional appointees. Determined to stay in power, the politicians procrastinated and prevaricated while foreign donors and the International Monetary Fund withheld $21 billion to rescue the economy until specific reforms were enacted.

In February, Covid-19 made its debut – lockdowns were prescribed but cases soared. Lebanese faced the pandemic as well as economic collapse, political meltdown, and revolution. 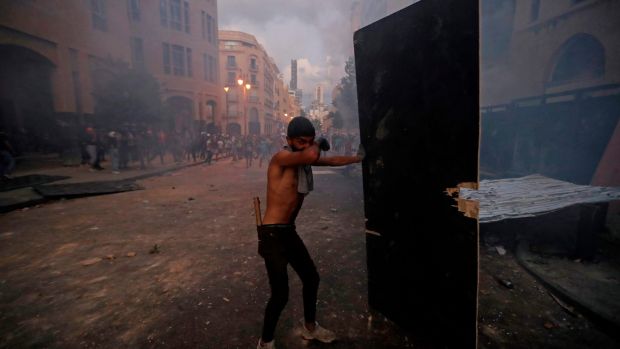 A protester covers his face from tear gas fired by security forces amid clashes in Beirut after a deadly explosion destroyed large parts of the city, on August 9th. Photograph: Joseph Eid/AFP via Getty Images

They forgot about “their money trapped in banks, the currency devaluation, and the lost opportunities; the Covid-19 pandemic swiftly dwarfed in perspective”.

Diab resigned. French president Emmanuel Macron accused politicians of “collective betrayal” and choosing partisan and personal interests over country. Diab’s successor, Mustapha Adib, could not form a cabinet of independents and stood down.

Procrastination has been the politicians’ chief tool to defeat the revolutionaries. Parliamentary consultations on reappointing Hariri prime minister have been postponed from this week to next.

Nevertheless, Lebanon has not come full circle. Although despairing Lebanese have emigrated, the revolutionaries have made gains. Lebanese have learned that if they are to survive, the regime must change.

An independent now heads the bar association, parliament passed two anti-corruption laws, eight deputies have resigned, and an international audit of the central bank is under way. The World Bank cancelled a loan for a dam that activists argued would destroy a biodiverse valley.

Devious politicians have echoed the call for a secular regime. Lebanese understand that change will take time, and they must persevere, organize and form alliances to ensure their revolution does not fail.