An Israeli couple travelling with their four young children have been killed by Palestinian gunmen in the occupied West Bank, the Israeli military says.

Eiran and Naama Henkin, who were in their 30s, were travelling between the Jewish settlements of Itamar and Elon Moreh, emergency services said.

The children, aged between four months and nine years, were injured.

The shooting came hours after Israel's PM said he was prepared to resume peace talks with the Palestinians.

Benjamin Netanyahu told the United Nations General Assembly in New York he would re-start negotiations "immediately" and "without pre-conditions", but that the Palestinian President Mahmoud Abbas was not interested. 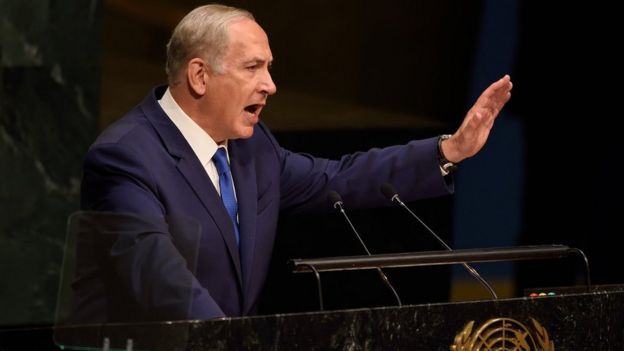 "I remain committed to a vision of two states for two peoples," Mr Netanyahu said.

Mahmoud Abbas attended a flag-raising ceremony at the UN on Wednesday.

The Palestinian president told the UN that the Palestinian Authority no longer felt bound by agreements with Israel which he claimed were "continually violated", saying Israel refused to cease settlement activities or to release Palestinian prisoners as agreed.

The Israel Defense Forces (IDF) said of Thursday evening's shooting that the couple "were shot to death when an assailant fired at their vehicle". The area where the shooting happened, near the Palestinian town of Beit Furik, was being searched, a spokesman said.

The four orphaned children's physical wounds are not thought to be serious.

President Reuben Rivlin said Israel would continue its "brave and unwavering fight against this cruel and heinous terrorism".

He said this was the "only way we can ensure the right of the orphans who lost their parents tonight, along with the right of all our children and grandchildren, to live with security and in peace, everywhere in the Land of Israel". 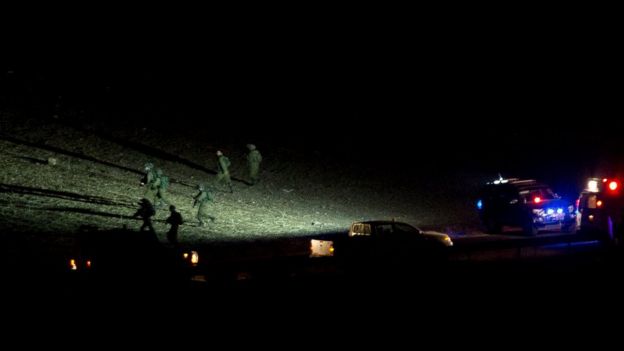 Image captionIsraeli soldiers were searching the area after the attack

There have been reports of at least two recent gun attacks on Israeli-registered vehicles near the scene of this latest incident, says the BBC's Kevin Connolly in Jerusalem, although the previous attacks did not have fatal consequences.

The Palestinian militant organisation Hamas, which is dominant in Gaza, said "we bless the killing of settlers in the West Bank".

Spokesman Husam Badran said: "We call on our people in the West Bank to carry out more quality operations like the [one] today.

"This is the only solution which is supported by the masses of our people everywhere." 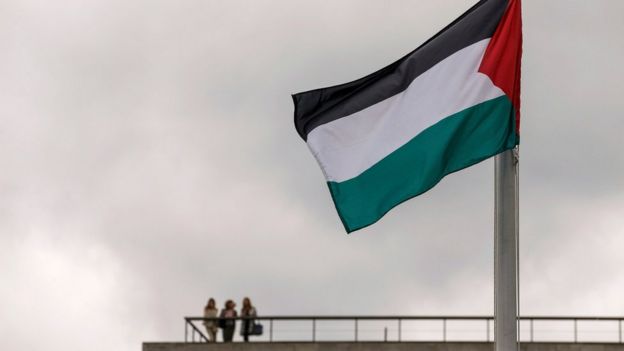 Mr Netanyahu addressed Mr Abbas directly in his speech to the UN on Thursday, saying: "President Abbas, I know it's not easy. I know it's hard - but we owe it to our peoples to try."

Two decades of on-off peace talks between the Israelis and the Palestinians since the 1993 Oslo Accord have failed to produce a permanent settlement.

Tensions have been particularly high in recent weeks over the long-running issue of access to the al-Aqsa mosque compound in East Jerusalem.

Al-Aqsa is one of Islam's holiest sites and is in the Temple Mount/Haram al-Sharif site also revered by Jews.

The Israeli prime minister also warned that the international deal on Iran's nuclear programme made war much more likely than peace.

He said Tehran had been "unleashed and unmuzzled" by the plan to lift sanctions, in return for limiting its nuclear activities.

Israel has consistently opposed the deal with Iran, which says Israel should not exist.

Mr Netanyahu has previously warned that Israel will do everything necessary to thwart the prospect of Iran developing nuclear weapons.