Syria conflict: How far is Russia prepared to bolster Assad? 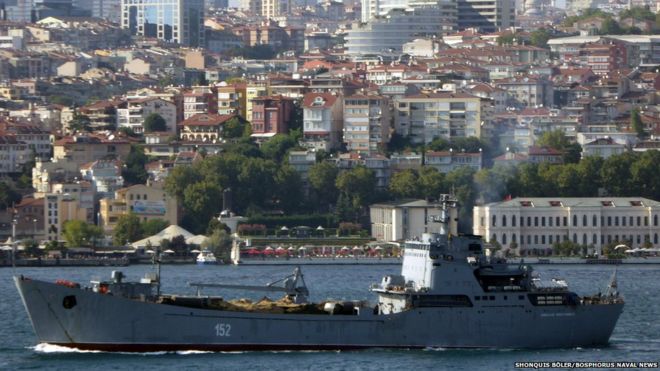 Just how far is Russia prepared to go to back the Syrian regime of President Bashar al-Assad?

Recent sightings of brand new Russian armoured vehicles in Syria, of types never previously supplied to its ally, suggest that with the Assad regime suffering serious reverses, Moscow is intent on redressing the military balance.

On 20 August, a heavily-laden Alligator class landing ship of the Russian Navy, the Nikolay Filchenkov,was seen passing southwards through the Bosphorus.

On board, according to experts who have analysed the images, were trucks and armoured vehicles.

The ship was believed to be on its way to Syria.

Subsequently, the Syrian army has released video material that shows seemingly brand new BTR-82A infantry combat vehicles in action or on exercises - a variant of the vehicle that has never before been supplied to the Syrian military.

The vehicles appear to be in a Russian paint scheme and thus may have been taken straight from Russian army stocks.

Separate images have emerged of Russian Tigre military utility vehicles; again a type that has not been exported to Syria before.

Caution must always be used when analysing this kind of material.

But Joseph Dempsey, an expert at the International Institute for Strategic Studies in London, says that the images "if authentic, provide strong evidence of the BTR-82A and Tigr being in Syria". 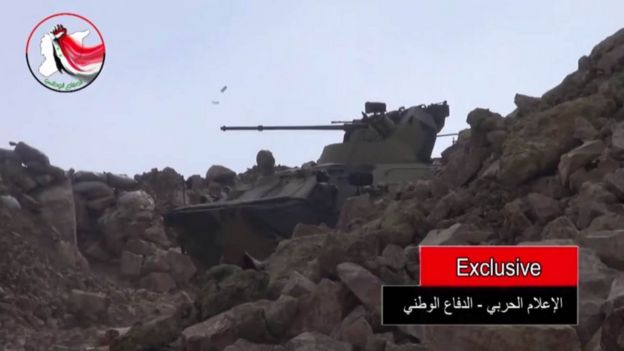 The delivery of these weapons raises all sorts of questions.

Why should new types not previously operated by the Syrians be supplied by Russia rather than older vehicles - like the BMP-tracked combat vehicle with which the Syrian army is familiar?

Syria did receive a small number of the related BTR-80 armoured personnel carrier in late 2013/early 2014 but the BTR-82A has a more modern and very different turret and weapons station.

Is this the first delivery of many? And who actually is operating the system?

Russia is one of the Syrian president's few foreign allies. It has long been a major arms supplier to Syria and, in the current crisis, it has given the Syrian regime important diplomatic support.

Russia was instrumental in helping to negotiate the deal in 2013 under which the Assad regime gave up its chemical weapons.

Russia has long maintained a small naval base on the Syrian coast at Tartus. It represents a toehold for Russian influence in the region that peaked during the 1970s at the height of the Cold War.

However, the Syrian crisis has alarmed Moscow. 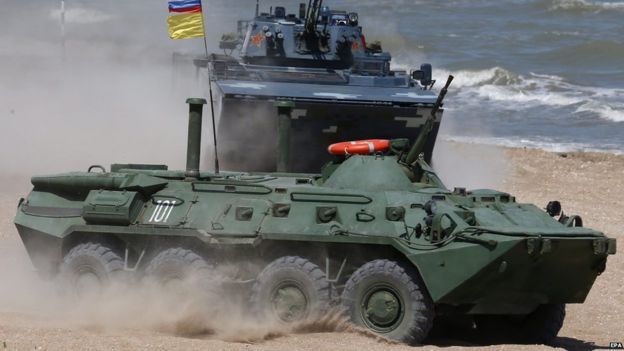 It is every bit as concerned by the rise of the murderous religious radicals of the so-called Islamic State (IS) movement as is the West.

Russia did not respond to the upheavals of the "Arab Spring" with the enthusiasm of many Western governments.

And in retrospect, given that hopes for a democratic surge through the region have collapsed, Russia's hard-headed pragmatism looks to be a little more realistic than much of the West's "aspirational" diplomacy.

The Syria crisis also provides Russia with an opportunity. Its ties to the Assad regime make it a key player.

Russian Foreign Minister Sergei Lavrov has forcefully reiterated Russia's position that the departure of Mr Assad cannot be a condition for any peace deal.

Such demands, he says, are "totally unrealistic and counterproductive".

Russia insists that it is working to create what it calls a "broad anti-terrorist front" to counter IS.

But the crucial thing for Russia is that the Assad regime must survive, whatever Mr Assad's personal fate in the longer term.

Much of the attention over recent weeks has focused on Russia's diplomatic efforts regarding Syria; its talks with senior Saudi and Iranian officials, for example.

But, in the meantime, things have not been going well for Mr Assad on the ground, with his opponents pressing ever closer to the Alawite heartland - the coastal basin to the east of the Mediterranean, inland from Latakia and Tartus.

Amidst the uncertainty, a host of rumours are flying round of a much greater Russian role. Russia has denied that it recently delivered advanced warplanes to Syria.

Some Israeli analysts, for example, believe that Russia is preparing to use its own aircraft against IS and might even be willing to play a greater role on the ground if the Assad regime's fortunes do not change.

This for now may be little more than speculation.

The Russians themselves have denied that any aircraft have been deployed to Syria to prepare for strikes against IS.

But the signal from the Nikolay Filchenkov may be that if needed, Russia is willing to provide a good deal more.