Brutal Images of Syrian Boy Drowned Off Turkey Must Be Seen, Activists Say At least 12 migrants fleeing the war in Syria, including two young boys, drowned on Wednesday while trying to reach the Greek island of Kos from the Turkish resort town of Bodrum,according to Turkey’s state-owned Anadolu news agency.

A sense of weary resignation at the plight of the Syrians — and hundreds of thousands of other refugees and migrants taking desperate risks to reach the safety of Europe — was briefly punctured by horrifying images of one of the young victims, a small boy whose body was discovered, face down in the sand, by a Turkish police officer. 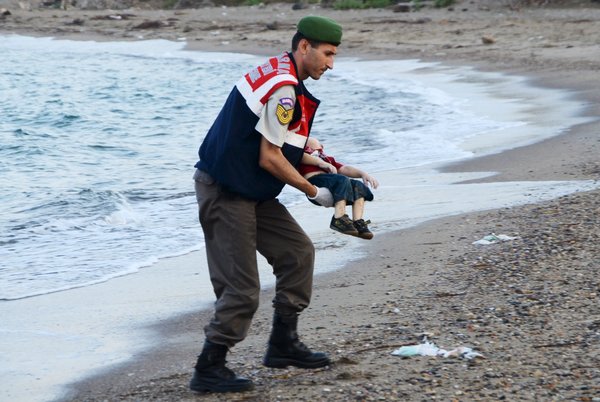 A Turkish police officer carried the body of a young Syrian refugee who drowned off the coast of Turkey’s Bodrum Peninsula on Wednesday.CreditNilufer Demir/DHA, via Reuters

The boy, in a red shirt and blue shorts, was identified by Turkey’s private Dogan news agency as Aylan, 3. The body of his 5-year-old brother, Galip, washed up on another part of the beach.

Photographs and video of Aylan’s lifeless body quickly spread across social networks in Turkey and then the rest of the world, posted by outraged observers, rights activists and reporters who suggested that the distressing images needed to be seen and could act as a catalyst for the international community to finally halt the war in Syria.

Among those who shared the images and expressed their dismay were Liz Sly, a Washington Post correspondent covering the war in Syria; Nadim Houry and Peter Bouckaertof Human Rights Watch; David Miliband, the president of the International Rescue Committee; and activists in the Syrian city of Raqqa and living under the rule of Islamic State militants.